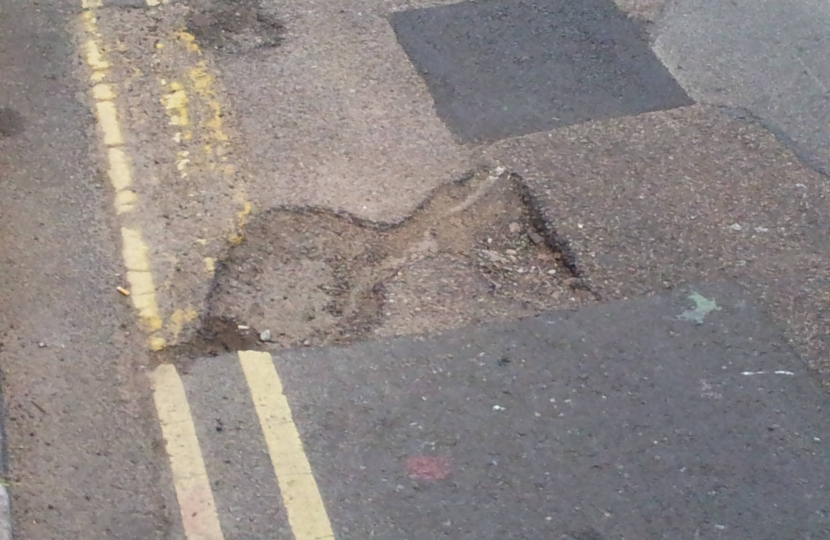 Kevin Foster, Conservative Parliamentary Spokesman for Torbay, has welcomed the announcement that £198,969 of new funding is on its way to tackle potholes across the bay.

Today’s announcement means that a total of £535,194 of additional funding for repairs by Torbay Council has been announced for this year, on top of the annual roads maintenance budget.

Over three million potholes will be filled in across England with funding from the £168 million Pothole Fund, announced in the 2014 Budget. This fund is part of more than £24 billion which will be spent on England’s roads between 2010 and 2021, the biggest investment in our roads since the 1970s which includes the long awaited Kingskerswell Bypass (South Devon Link Road).

Kevin said: “This is great news for everybody who uses the bay’s roads, not least the many cyclists and motorcyclists for whom potholes pose a particular threat. So far this year just over half a million pounds of extra funding has been made available and I know the Council will be keen to hear from residents where it should be spent.”

“This additional funding for pothole repairs together with investment to build the South Devon Link Road and relieve pinch points on our network, is putting Torbay on the Highway to The Future.”

Residents can report a pothole that needs repairing to Torbay Council by following this link: https://forms.torbay.gov.uk/highways

"This is great news for everybody who uses the bay’s roads, not least the many cyclists and motorcyclists for whom potholes pose a particular threat."