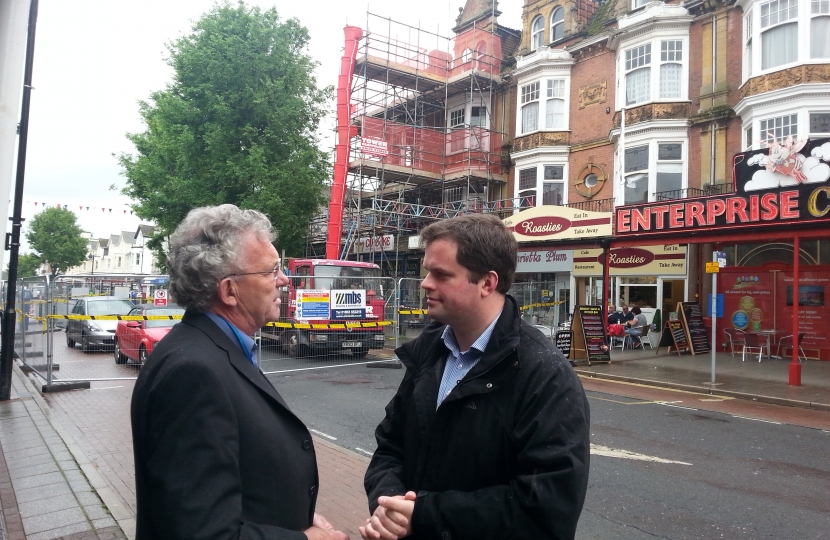 Kevin Foster, Conservative Parliamentary Spokesman for Torbay, this week meet with local Councillor and Fire Authority Member Stephen Brooksbank to discuss the impact proposed cuts might have on incidents like the large fire in Torbay Road, Paignton.

Kevin meet Stephen on site in Torbay Road where cleaning up operations are continuing after the fire which broke out on 25th June 2013. The fire resulted in major damage to a four storey building in one of Paignton's most distinguished, Grade II listed, Victorian facades. It has also made a number of families homeless and has affected businesses in the ground floor shop units. Eight fire engines were called to the scene, with a Bronto Platform being used to fight the fire.

Earlier this year Devon & Somerset Fire Authority unveiled a proposal to change the crewing arrangements of the second fire appliance at Torquay from whole time to “on call”. This proposal would see the number of Firefighters available at the station for immediate deployment reduced from 9 to 5. Public opposition to this proposal has been significant with over 20,000 people signing a petition opposing the plan.

The two fire engines at Torquay and the one at Paignton Fire Station provide the core of the fire cover for the bay. Kevin believes that the incident in Paignton raises real questions that need to be answered about how future incidents would be handled as the authority prepares to vote on the cut proposal next week.

Commenting Kevin said: “Thankfully no-one was seriously injured in this incident, but the damage to the buildings indicates the severity of this fire. The two full time crews at Torquay do not just serve the area around their own station, but together with the single engine at Paignton, provide cover across a wide area of the bay. This incident, coming only a couple of weeks before the key votes on the proposal demonstrate what can happen and why the public are right to be concerned about the plan to cut cover in the bay.”

Kevin added: “Next week the Fire Authority is set to make a final decision on this proposal and this incident helps emphasise the importance of getting it right. There are a number of questions that need to be asked about how the response would have been affected if the cut at Torquay had already been implemented. Local people have made their views clear and it is now time for the Authority to listen to them when making its decision.”